Powai the Kutha’s prediction for the India Sri Lanka series!!! 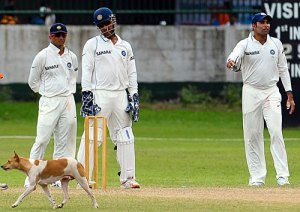 An honorable follower of I3J3 recently had an intense conversation with the famous dog, the renowned soothsayer, prognosticator, Oracle and so on… of Mumbai on his observations on the forthcoming exciting series between India and Sri Lanka. For those of you who are unaware, these two countries who are also neighbors are playing once again as if we haven’t had enough already. It seems like deja vu all over again. Anyways, I digress, but the fortune teller had these predictions to make on the basis of an informed assessment using a strong evidence base and statistics communicated to it from telephone pole to telephone pole…..

1. Sri Lanka will score 1500 runs in an innings by playing on all 5 days and declare just before the mandatory 20 overs are required to be bowled.

2. Aravinda De Silva will come out of retirement and score a double hundred.

3. Ajantha Mendis will deliver a table tennis ball that makes a funny noise on its way to the batsmen.

4. Rahul Dravid and Sachin Tendulkar would have analyzed the frequency of the noise emanating from the ball out by the end of the series to be ready in time for the next series starting next month. They will recommend wearing ear phones as a countermeasure.

6. Lasith Malinga will add two more rings to his tongue to add another layer of distraction to his yorkers.

7. Yuvraj Singh will score a hundred in a test match destined to be draw from day one and confirm his place in the side for the next two decades.

8. Virendra Sehwag will get so bored by the series that he will deliberately injure his shoulder and head back home. M. Vijay will come in as his replacement, flex his muscles, shoulder his arms and see his stumps flying..

10. India will retain its number 1 position. Sangakkara will claim to have morally won the series, complain that the UDRS system would have allowed him to score 2000 runs and seek another series in India.

All will end well and India will return after a wonderful series!!!