Cricket at Motera and Wankhede

Living in Baroda paid off a little more when I recently got the opportunity to travel to Ahmedabad and Mumbai for weekends’ play of test matches against England. It was my first trip to the cricket grounds in either cities. In this post, I’ll share my experience of watching cricket at these arenas.

It was a 3 hour trip by bus, or a two hour trip by car to the stadium. There were no online ticket sales. So, I had to get those tickets at the stadium ticket counters. There was car parking inside the stadium premises, but the day I went there in my colleague’s car, the police said we couldn’t take the car on the street leading to the stadium unless we had a ticket. Funny, because we can buy the ticket only when we reach the stadium. We had to hence park the car elsewhere and pay people living nearby to guard the car.

Anyway, we could get tickets for some good seats at the Adani Pavilion, for seats right over the dressing room and just behind the cameramen. The Gujarat Cricket Association has a rooster as its logo. You will laugh at that till you reach the security checks. There were 4 layers of security checks, and you will feel violated every time. And you will have to chuck away all the coins you carried on you before entering. 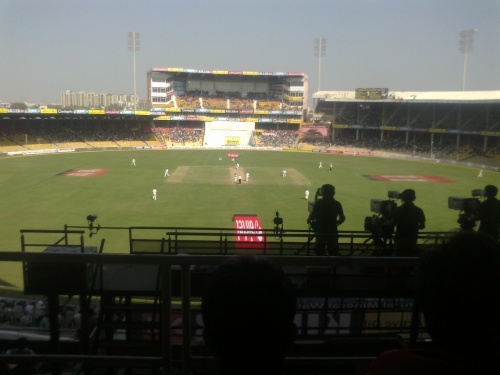 The seats didn’t seem new, and they surely weren’t cleaned every evening. The crowd built itself up and before the first session ended, the Pavilion stands would be more than 80% full. The ones on square were less than 50% full. That seemed odd, because I could see a huge queue of people waiting for those tickets. The stands above the commentary box were less than 30% full because the sun shone on them almost all day.

The fans would cheer loud the wickets that Indians picked and applaud English boundaries. But the stupid thing was the way it “booed” almost everything not worth cheering. It was like showing a neutral reaction would be illegal. And that was not one portion of the ground. That was the whole stadium. At first I thought they went “ooooh (that was close)!” But that didn’t make sense. I don’t think they would go “oooooh” every time an English batsman got out. And they booed every English supporter who would get up to cheer an English spark. So, the crowd there was meh…

In my stands, we had to climb down to a walkway for food and drinks. Can’t have a great meal out of samosas, popcorns, sandwiches, burgers, puffs, bhel puri, icecream, soft-drink and water, though. But it was fine. Jamtha/Nagpur served biryani and stuffs, which was more filling. I didn’t find that here, so was a bit disappointed. You will land in a bit of trouble if you had too much to drink. The toilets were poorly maintained there.

The stadium had only one exit. So, at the end of a day’s play, you would have to walk atleast 1 km along dusty pathways to exit the stadium from a single 5 m wide gate. And then, the hundred autowalas will refuse to go to the exact one place you want to go. (the foreigners would pay him much more, why would he take you on board?) So, I had to walk another km before getting hold of a tuk tuk.

It was nice to be able to easily get entry (tickets and all) to the stadium, but it wasn’t quite great an experience inside it.

I had made a weekend trip to Mumbai for the 2nd test at Wankhede. It was an overnight train journey away from Baroda. You could get the tickets to the game online or at the MCA windows near the stadium (which had long queues). Even if you bought it online, you had to come to the stadium to collect the tickets though, and I heard from my friend that even that was a long queue, which was later sorted out to make it shorter.

I reached the gates an hour before play with my friend. We had two layers of man handling security checks, and we were in. We were in level-2 of the North Stands (opposite end of the ground to where the dressing room was), and would later move to level-3 when the sun shone down upon us.

Level-2 was near the press box, and Level-3 was right above the press box. Some of the liveliest people were crowded in the North Stands. Almost every cheer that ringed through the stadium emerged from the North Stands. The most noticeable one was the “PU-JA-RA” chant that echoed across the stadium. I was at Garware Pavilion (which was near the dressing room) for one session, and from there you could hear the “PU-JA-RA” chants from that North Stands section welcoming Pujara to the middle. That was one of the most amazing moments I’ve been a part of. The other stands had drums shooting out bhangra that had people around it dance.

The Barmy Army was larger in number at the Mumbai test than they were at the Motera test. So, the English team got some good support from them. Indian fans were quite respectful with them too. Alastair Cook and Kevin Pietersen got standing ovations from the entire ground after their tons. And a lot of those fans mingled along with people freely. I didn’t feel like talking to a single stranger at Motera (or Nagpur, for that matter). But, here I could talk to some.

The crowd also let the Indian bowlers know of their horrendous bowling when they had to. Harbhajan Singh got irritated once and complained against some fans, who (I heard) were evicted from the stadium. This, after Harbhajan was totally okay with fooling around with the Motera crowd which got him to happily wave at them, crack jokes with his teammates, kick stuffs like a pro footballer, etc, while he was a water-boy. The crowd there loved the performer that he was. Mumbai crowd did not like his performance at Wankhede, and he did not like that attitude.

Food was served at your seat. Samosas, rolls, cold-drinks, ice-creams, pizzas! Water was available in the walk-way. And what’s more – you can go out of the stadium and get back in any time. So, people could go out to a foodie street near Wankhede and have their fill. A couple of stationery shop owners on that street had the “Why did I not open a snack bar instead?” look on their faces during the lunch hour. And drink all you want, the toilets are fine at Wankhede. The foodie streets had some wonderful juice and soda shops!

There were multiple exits which would drop you are various points around the Churchgate station and Marine Drive. So, the crowd was able to disperse in multiple directions and spread away. Many went to Marine Drive, some went to food joints around the place. Others boarded trains at Churchgate or taxis and buses outside. There wasn’t the flood of exiting human beings that was seen at Motera.

I was exhausted after the two days at Wankhede, both of which were full of fun. It was a wonderful experience there. Even if India had a bad day, being with that crowd would help keep your spirits up.

Looking ahead to watching more games, at new places. Would love to be at Wankhede for many more test matches.

6 responses to “Cricket at Motera and Wankhede”