Mohali – Better and Worse than I thought.

When I moved to Chandigarh just before 2013 began, I had my eyes on Mohali for (at least) two days of cricket – 17th March for Syed Mushtaq Ali trophy games, and 24th for the test match against Australia. I thought I’d take another day off for the test match, if I could. And I wanted to be at the ground for S.M.A. Trophy just to see the stadium in its glory. That plan got dumped into the trash can and then burnt when BCCI changed the order of the venues hosting the games. For 3 weeks, BCCI website said Mohali hosted the test match AND the S.M.A. Trophy T20 games on 17th March. They later shifted them to Lahli and Rohtak.

So, now, I had to make sure I attend this test match. I must thank my colleague for covering up for me and going to work on Sunday, hence allowing me to attend Sunday’s play.

I (and 2 others) reached Mohali at around 7.30 am, and got off the tuk-tuk at a point around 500 m away from the stadium. Two dozen policemen had cordoned off entry to the street leading to the stadium gates. So, we walked. Nearing the stadium, I spotted a ticket counter. We had to buy tickets, and were looking for counters selling daily tickets. A policeman from another group of two dozen policemen stepped towards us and told that all ticket sales have been closed at that booth and we would have to go other gates (1 and 4) for tickets.

We neared gate 1. There were another 30 policemen there who stood there like ushers and shooed us away, saying there are no ticket counters there and all ticket sales were closed everywhere. We told them that their whole squad is making the fans go around in circles for nothing. We were in such a tense conversation with the policeman, that my colleague later told me he missed an opportunity to take a photograph along with Sudhir Kumar, the famous Sachin Tendulkar fan with tricolour painted on his body, who was standing right there.

One policeman then showed us the address of a bank which sells the tickets and asked us to go there and buy the tickets. It was 7.45 am. On a Sunday. What bank opens on a Sunday, that too at 7.45 am?

Left with no choice, we pulled another tuk-tuk and reached the bank. It was closed. But, the guard directed us to a fellow who was selling tickets to the game. Yes, black. Now, sshhhh. He had tickets to only one stands (General Chairs, West Block). They were season tickets, and cost Rs 250 for the whole match. They were sold to us at Rs 400. Again, left with no choice, we bought those tickets.

In retrospect, we paid 8 times the amount the tickets were worth. (Maybe 4 times, if I had come to attend Monday’s play, which seemed impossible for me, personally)

As soon as I entered into the stadium, I let out a “Wowwwwwwwwwwww”. It was so very beautiful. “Cute” should be more precise. Small stadium, green outfield, clean look, nicely constructed Pavilion and aesthetically beautiful open stands. It looked like a wonderful throwback stadium to enjoy test cricket. It was like Nagpur’s VCA Jamtha ground without the second tier. 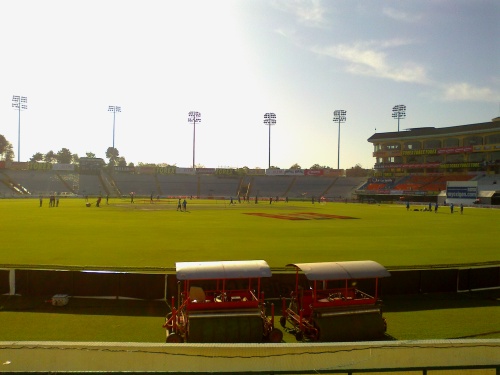 And yes, of course, there were more policemen (and women) in the stadium. They must have been grand cricket fans, they were in the stands too. Front seat. And there were stewards, like the ones you see in English cricket games – paid to keep watch on the spectators and not turn around and look at the play. (Yes, ball boys were there too.)

The mid-March heat did not start burning until it was 11 am. A breeze would go past the stadium once in a while, but not soothing enough to some. The open roof was a take and give. The sun shone hard in the afternoon, but the intermittent breeze kept us from sweating. The organizers would come in once in a while and throw the “4” and “6” placards into the crowd to get them to show that up and pump the Indian batting. Instead, the audience used that to cover their head from the sun. Later, they innovated and carved holes into it to morph that card into a cap.

By 11 am or so, the crowd in my section started filling in at a nice pace. It was nearly 75% full by lunch time. I got to know that a ticket counter was opened after 9 am to sell season tickets to this stand alone. TO THIS STAND ALONE. I looked up and scanned the other sections of the ground, and they were plain empty. Only those who had tickets to those stands by day-1 could use that to enter there on any other day. No tickets to those stands were sold after day-1, as told by a policeman guarding the gates early in the morning.

The food in the ground wasn’t great. Pizza Hut’s PHD was there to the rescue, though. Diluted aerated drinks were sold at overpriced rates. Bottled water was sold at least 2.5 times its original price, only until they ran out of water by tea time, though.

How I wish my section was not full!!?! While it was nice to see public turn up for the game, it was sad to see such an idiotic public turn up for the game. Some of the people who turned up didn’t care about the test match. They were here primarily to take photos of them posing with the ground behind them, capturing it on their mobile phone that looked as big as my school physics lab record note book. And then they would whine about the test match being played at a slow pace and then go to some other place and take more photographs. Maybe Punjab Matrimony dot com has a lot of “Me at Mohali” photographs uploaded over the weekend.

There was a “We want Yuvi and Bhajji in the team” placard. I am sure they meant a dance team.

The worst part about this crowd was how much it wanted, begged and prayed for Murali Vijay, Ravichandran Ashwin, Bhuvneshwar Kumar, Ishant Sharma and Pragyan Ojha to get out. It led me to conclude that India does not deserve to host a game at Mohali and assume it will get home advantage from the crowd support here. Crowd support? Both of those mean nothing at Mohali. It was just so bad out there.

The fickle crowd was all so very “I Heart Bhuvi” as soon as David Warner got out first over, though.

The day’s play of cricket was nice. I was blamed for bringing ill luck to the ground and felling all Indian wickets, though. But, hey! India won. Regardless, I have a lot of points to jabber about this stadium experience.

First of all, the Chandigarh public alone cannot be blamed for poor attendance. PCA/Mohali is responsible for half of this nuisance. Public can buy tickets only if the association sells tickets. They sold tickets to just one stand (which was not even the cheapest priced stand). And those tickets were season tickets, being sold on 4th day. I felt ashamed to be in a stadium where the ground was jam packed for about a 60 degree big chunk of a pie chart and nearly empty everywhere else. It must have looked disgusting on television, if they cared to show that difference at all.

Check out how differently two different stands were occupied. Tickets were sold on day-4 ONLY to the stand on the right. (that too season tickets)

Why can they not sell daily tickets? All those tickets that were not sold are lying waste in some corner of the PCA office, anyway. Sell them, get the public inside. There was no cohesion in the crowd. There were no returning fans. We were all first timers who chanced upon a test match at Mohali. If they let the fans choose from a variety of tickets, a big number of tickets, more parts of the stadium would have filled. It did not happen. It seemed silly.

I liked how the security checks were neat at the entrance of the stadium. But, it was very disgusting to see more policemen than fans in the 0.5 km radius outside the stadium before gates opened. And most of them couldn’t direct the public to ticket counters.

If, say, someone came to Mohali, and say all this foolish ticketing and policing during a test match in the year 2004, he wouldn’t be interested in visiting the ground in 2005. His friends won’t attend it either. 8 years hence, half the cricket fans in Chandigarh won’t. The other half doesn’t care about test cricket, anyway. The association has not given importance to the fans here as far as the ticketing goes (I have only one instance to talk about, though). And, other factors affecting fan-fare can be debated only if we have enough bums on seats inside the stadium.

Before I end, also have a recommendation for the PCA. I see that PCA doesn’t  want to let in the crowd, and most of the junta doesn’t want to come in anyway. So, why not pull down some of the stands on the square and convert that into grass lawn banks? You can have limited ticket entry to the lawn banks. Price it at whatever you wish, only a few are going to turn up anyway. So, let them have a nice time there. Like the ones in South Africa or New Zealand. It will be beautiful. It will also be a testimony to Chandigarh’s greenery, too.

Honestly speaking, it will take me some convincing to attend another game at Mohali. Well played, PCA. You win.

7 responses to “Mohali – Better and Worse than I thought.”