Harder they fall, stronger you become. 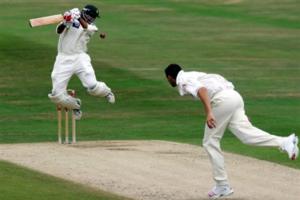 You are the master of your slave.

A few changes to playing rules

Earlier this year, David Morgan, President of the ICC, and others sought the removal of Sunil Gavaskar from the ICC Cricket Committee over his perceived conflict of interest (being a broadcaster and administrator) and his outspoken comments against Australian and English dinosaurs. Indeed, several reports, including this one by Christopher Martin-Jenkins, even said that Gavaskar had been sacked from his post! Peter Lalor weighed in to the argument too in this column on Fox Sports with a headline that reads “Sunil’s twin roles a ‘concern'”. Sunil? Duh?

Anyway, I digressed even before I began! Sunil Gavaskar chaired the ICC Cricket Committee which has come up with a list of innovations. Gavaskar’s committee — or should I follow the perfect journalistic example set by Peter Lalor and say Sunil’s committee, as though the object of discussion was my brother or my best friend? — included Mark Taylor (former Australia captain), Mickey Arthur (South Africa coach), Michael Holding (former West Indies fast bowler), Simon Taufel (ace Australian umpire), Steve Tikolo (Kenya captain) and Tim May (CEO of FICA, the players’ association).

Below are some of the major recommendations made by this committee to the ICC.

The major recommendation is that each team be allowed to refer a maximum of three decisions to the third umpire who could use technology such as Hawkeye to review the referred decision. Two things are not clear just as yet from the reports: (a) Is that three decisions each innings, each session, each day, each match? (b) If a team refers a decision and is successful in overturning the on-field umpires’ call, does that still count as a lost referral?

Although this experiment was reported to be unsuccessful when tried in English domestic one-day cricket last season, this referral system could prevent the sort of drama we saw in the Sydney Test (See this YouTube collection if you are an Indian fan and are in desperate need of a gut-wrench moment in your life!) between Australia and India early this year!

The referral experiment was said to be unsuccessful in the English domestic ODI season last year because it turns out that the 3rd umpires were largely loathe to turn on their on-field colleagues! Clearly, with some coaching, guidance, counseling and training, this issue could be overcome. The 3rd umpire has the benefit of technology as well as time and the on-field umpire should not see it as a blemish on his decision making prowess if a decision of his is turned down. Several other sports successfully manage a referral system that is aided by technology.

The ICC Cricket Committee recommended further that Hawkeye could be used only to determine the path of the ball up to the point that it struck the batsman. A wise decision in my view. The questions that could be addressed through this could be, for example, “Did it strike in line?” (for off stump LBWs), “Did the ball pitch outside leg?” (for leg stump LBWs), and “Was the impact too high on the pads?”, rather than, “Would the ball have gone on to hit the stumps?”

In another significant and good move, the committee has also recommended that the on-field umpire should eb allowed to consult the 3rd umpire on whether or not a catch was taken cleanly. That should put an end to the sort of stupid pact that Anil Kumble and Ricky Ponting signed prior to the recently concluded Australia-India Test series — a pact that was torn up after the contentious Sydney Test!

Apart from this major recommendation which, in all likelihood will be accepted by the ICC, the Cricket Committee also ruled out “comfort breaks” that fielders use to reign in substitutes. The Cricket Committee has indicated that substitute fielders should only be permitted in cases of injury, illness or other wholly acceptable reasons. I am not clear what “wholly acceptable reasons” means in this context. However, if a player does require a genuine “comfort break” does this then mean that the fielding team will field only 10 players for the duration of this “comfort break”? This is not entirely clear from the report. This is, however, in my view, a good suggestion that needs to be adopted. This may also put an end to the sorts of incidents we saw in the 2005 Ashes series when Ricky Ponting and Duncan Fletcher had a war of words over Englands’ use of specialist fielders as substitutes.

Another significant recommendation is that in ODIs the timing of one of the three Power Plays would be determined by the batting side! As a result of this recommendation, there is no “Second PowerPlay” anymore. In both the 2nd as well as the 3rd PowerPlay, the fielding team can employ 3 fielders outside the restriction circle.

Thankfully, the dreaded bowl-out that decided tied Twenty20 games up until now has been replaced by a one-over-per-team play-off! Sensible, in my view.

The committee also recommended a Test League for the top two sides in the Test Championship. I think that this is a good idea. However, I’d like the Test League to be between the top three sides in the table. Thankfully, the Super Series idea — a dud in the first place — has been killed!